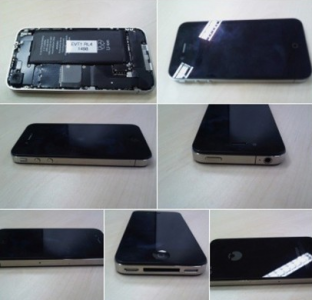 I was on sabbatical when Jason got his hands on the iPhone prototype.

An hour after the story went live, the phone rang and the number was from Apple HQ. I figured it was someone from the PR team. It was not.

“Hi, this is Steve. I really want my phone back.”

He wasn’t demanding. He was asking. And he was charming and he was funny. I was half-naked, just getting back from surfing, but I managed to keep my shit together.

“I appreciate you had your fun with our phone and I’m not mad at you, I’m mad at the sales guy who lost it. But we need the phone back because we can’t let it fall into the wrong hands.”

I thought, maybe its already in the wrong hands?

He continued, “There are two ways we can do this. I can send someone to pick up the phone–”

“–But you know someone who does…or we can send someone with legal papers, and I don’t want to do that.”

He was giving us an easy way out.

I told him I had to talk to my dudes. Before he hung up, he asked me, “What do you think of it?”

The next call, I told him we’d give him his phone back. He said, “Great, where do we send someone?” And I replied that before we talked about that, we needed to talk about the conditions: we needed Apple to claim it as theirs, which is what we saw as the right legal process for claiming goods that had been lost. He said he didn’t want to claim it on record because it would affect sales of the current model. He said, “you’re asking me to shoot my toes off!” Maybe it was about the money, but maybe it wasn’t. I got the feeling that he just didn’t want to be told what to do, and I didn’t want to be told what to do, either. Especially by someone who I was supposed to be covering. Plus, I was sort of in a position to tell Steve Jobs what to do, and I was going to take it.

This time, he was not happy. He had to talk to some people, so we hung up again

When he called me back, the first thing he said was, “Hey Brian, it’s YOUR NEW BEST FAVORITE PERSON IN THE WORLD.”

I laughed and so did he. Then, he sharply pivoted and said, “So what’s it gonna be?”

I gave it to him straight: “If you don’t want to give us the letter claiming it, I guess it’s going to be papers. It doesn’t matter because one way or another we’ll get our confirmation that it is yours.”

He did not like that. Steve said, “This is some serious shit. If I have to serve you papers, and go through the trouble of it, I’m coming for something and its going to mean someone in your organization will go to jail.

I told him we didn’t know anything about the phone being stolen, and we intended to give it back, but we needed Apple to claim it. Then I said I’d go to jail for this story. And then he realized I wasn’t going to budge.

Then things got a little bit uglier, and dicier, and I don’t want to get into that stuff on a day like today because my point is that he is a beautiful and fair man and probably not used to not getting his way and he was clearly not getting his way on this day. Everyone has things that make them angry. My point is coming up.

Steve called me back, with a cold tone in his voice, saying he would send a note claiming the device. The last thing I said to him was “Steve, I just wanted to say that I like my job, and its exciting sometimes, but sometimes we have to do things that are difficult and what some might consider parasitic, with regards to reporting on health. And things like this.”

I told him I love Apple, but I have to do what’s right for the public and readers. I was trying to hide the fact that I was sad.

He replied, “You’re just doing your job.” And he said it in the kindest way possible. Which made me feel better and worse.

This was the last time Steve would be kind to me.

I’d walked around justifying how things went down for weeks after that. One day, a veteran reporter friend of mine and I were talking about the situation. At some point he asked me if I realized, irrespective of right or wrong, that we’d caused Apple a lot of trouble. I paused, and thought about Apple and Steve for a little bit, and all the designers and hard working people who built the phone. I said, “Yes.” I started to justify it as the right thing for the readers, and then I stopped. And I just kept thinking about Apple and Steve and how they felt. And thats when I knew my heart was not proud.

I will not regret things professionally. The scoop was big. People loved it. If I could do it again, I’d do the first story about the phone again.

But I probably would have given the phone back without asking for the letter. And I would have done the story about the engineer who lost it with more compassion and without naming him. Steve said we’d had our fun and we had the first story but we were being greedy. And he was right. We were. It was sore winning. And we were also being short sighted. And, sometimes, I wish we never found that phone at all. That is basically the only way this could have been painless. But that’s life. Sometimes there’s no easy way out.

I thought about the dilemma every day for about a year and half. It caused me a lot of grief, and stopped writing almost entirely. It made my spirit weak. Three weeks ago, I felt like I had had enough. I wrote my apology letter to Steve.

Steve, a few months have passed since all that iphone 4 stuff went down, and I just wanted to say that I wish things happened differently. I probably should have quit right after the first story was published for several different reasons. I didn’t know how to say that without throwing my team under the bus, so I didn’t. Now I’ve learned it’s better to lose a job I don’t believe in any more than to do it well and keep it just for that sake.

I’m sorry for the problems I caused you.”

Young Steve Jobs was known for being unforgiving to those who betrayed him. But a few days ago I’d heard from a person very close to him that “it was all water under the bridge.” I never expected to get a response and I never did. But after sending that I forgave myself. And my writer’s block lifted.

I just feel lucky I had the chance to tell a kind man that I was sorry for being an asshole before it was too late.