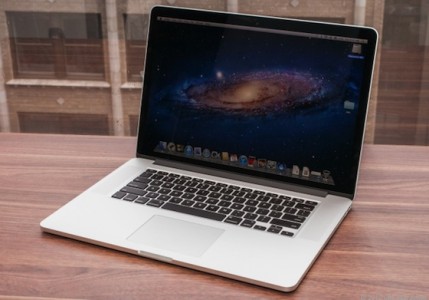 Superfast. Superthin. Superlight. Superlong battery life. Immense storage. Enough memory to keep lots of programs open at once. Stunning screen, comfortable keyboard, terrific sound. Fast start-up, rugged body, gorgeous looks.  And, of course, inexpensive.  The new Apple laptop that went on sale Monday hits an impressive number of those high notes in one radical swoop. As you might guess, the one it misses by the biggest margin is “inexpensive.”

Is this the best Mac ever? You can’t ignore the Air as an amazing piece of machinery, especially with the new, higher-powered Ivy Bridge processors and faster SSDs tucked inside its wedge profile. But, this new Pro is on another level of performance. With a quad-core processor and up to 16GB of RAM it’s a proper beast — a proper beast that you can throw in your messenger bag and carry around all day without spending all night complaining about an aching back.  That said, this is not exactly a small machine, heavy enough that those happy Air users who’ve been feeling tempted might want to take a swing by their closest Apple Store and lift one themselves. It’s expensive, too.

If you’re in the market for a premium OS X laptop right now, it’s hard not to recommend the new MacBook Pro with Retina display. If, however, power isn’t your ultimate goal, may we suggest shaving a few pounds and specs for the MacBook Air. As for everything in between, those non-Retina “standard” MacBook Pros, well… the writing’s on the wall. And of course, it doesn’t hurt to be even a little bit patient and wait for more apps to push Retina-optimized updates — if you get the MacBook Pro with Retina display now, you’ll be waiting on the world to change.

Even for those of us who are unlikely to spend more than two grand on a computer, or who prefer something more ultraportable than a 15″ model, the arrival of the Retina MacBook Pro is a meaningful moment in Mac history. It’s the most refined, advanced PC that Apple has produced to date. And it’s a safe bet that the ideas it exhibits will be reflected in future models from the company, including ones with smaller screens and smaller price tags. It’s both a great computer, and a preview of great computers to come.

I’ve previously called the 15-inch MacBook Pro one of the most universally useful all-around laptops you can buy. This new version adds to that with HDMI, faster ports, and more portability. But it also subtracts from that with its exclusion of an optical drive and Ethernet port, plus its very high starting price. The Pro and Retina Pro are clearly two laptops designed for two different users, and with the exception of all-day commuters who need something closer to a MacBook Air or ultrabook, one of the two branches of the MacBook Pro family tree is still probably the most universally useful laptop you can buy.

It’s worth noting that Apple didn’t describe the new MacBook Pro as its “Retina Display” upgrade to the previous Pro: instead, it referred to the notebook the company’s best ideas for the next-generation of Pro. That’s because there’s more to it than all those extra pixels. Apple has polished, trimmed and pared away at its flagship to bring it resolutely up to date with the leading edge of the computer ecosystem. While it may command a $400 premium over an entry level old-style MacBook Pro, that’s not quite a fair comparison. Spec-up a regular 15-inch Pro with 8GB of memory, a 256GB SSD and the highest resolution display possible (1680 x 1050) and you’re looking at $2,499: a full $300 more than the entry-level Retina Display version but still offering fewer pixels.