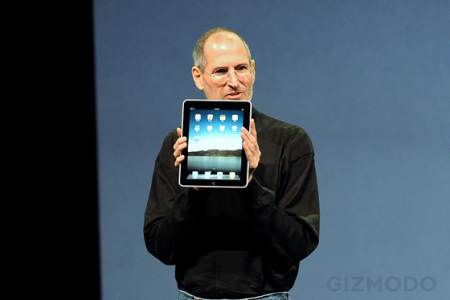 I dated for years a young woman whose father was Steve Jobs’ neighbor in Palo Alto. I thus found myself in the neighborhood often, at dinners, or parties, etc. We would see the Jobs come and go – they have a “normal” house, no gates, no guards, no high fences, not even a big lot. Often, leaving a party at my girlfriend’s house late at night I would drive past their house and you would actually see Steve sometimes, working on a Mac.

One afternoon I attended a party, driving an old Sunbeam Alpine sports car I had the misfortune to own at the time (http://www.passthespanner.com/?c…). After the party, I started the Alpine, pulled away from the curb, and – as classic British sports cars will oft do – the electrical system blinked out and I coasted gracefully to a stop, directly in front of the Jobs’ driveway.

Their cars weren’t there, which was a relief to me, because I was sure they would consider me some weird stalker. So I got out, popped the hood and tried to quick-fix the electrical to at least move further away – and call AAA.

Within about 15 minutes, of course, I heard two cars pull in behind me, and into the Jobs’ driveway – the Jobs were home. I huddled under the hood of the Alpine and hoped they wouldn’t notice – although I was the only other car on the street. They went inside, with kids, thankfully, without saying anything. So I closed the hood and prepared to walk back next door to my girlfriend’s parents house to call AAA.

As I was putting my jacket on, I heard a call from across the street behind me – the Jobs’ driveway – “British or Italian?”. It was Jobs’ lovely wife Laurene. “British,” I said, “and acting like it.” “You want a beer?,” she said. I tried to decline (shocked I guess at first), but she insisted, said “you’re not going anywhere”, and walked back in the house – only to return with two bottles of beer.

I was determined not to let on that I knew exactly who I was talking to – I was so afraid of being cast a stalker – but the scene was already getting weird for me, standing by my broken car having a beer with Steve Job’s wife. So it got weirder.

“You know, we have a friend who knows all about these Sunbeams. We should call him.”

I begged her not to, that I’d call AAA and be on my way. She left her beer and went back in the house for a minute, only to return saying, “they’re on their way out, but said they would drop by to take a look.”

By this point I am fully resigned to whatever story is going to play out. It was starting to dawn on me that these were not just Silicon Valley elite – they were real people, just helping a poor guy out. It was just unexpected, given what you might think about people like this: it would have been so easy for them to just ignore me. Or call the police.

Within about 15 minutes a very long, very black car I won’t identify pulled up and – Felini could not have directed this – a handsome gentleman in (I think) a tuxedo, and a beautifully formally dressed wife emerged, to examine my car. This was Laurene’s friend, the Sunbeam mechanic.

I protested, all was ignored. The tuxedoed man (who to this day I have no idea who he was – I’ll call him James Bond) took off his jacket, opened the hood of my car, and commenced to fishing around inside, while we all visited amicably.

So Steve comes out.

At which point – being an admirer of Jobs for many years – I guess I knew was inevitable, and I both dreaded and anticipated it. He ambled over. I think he had a beer too. And asked what was going on. He was joined by one of the kids.

The Jobs’ made small talk and joked with their friends – dressed to the nines, repairing my car – while I politely thanked them over and over and tried not to throw up at the insanity of the scene. And then of course it got even weirder, or funnier, depending on whether you were me or not.

James Bond told someone to try to crank the car. I was talking with Laurene, so Jobs actually sits down in the Alpine and tries to crank it – with his kid sitting behind him. To no avail.

So I have to stop here – it’s a Kodak moment – something you want to remember. It’s a beautiful Fall evening in Palo Alto. Your car’s broken. A formally dressed close friend of Steve Jobs is under the hood working on your engine. You are talking with Steve’s absolutely lovely and down to earth wife. Steve is in the car, with his kid, trying to crank it.

That’s the moment. You don’t often get close to people like the Jobs, much less in a ridiculous situation like this, where you realize that they are just really good people. They’re normal, funny, charitable, real people. Not the people the press talks about. Steve is not the maniacal business and design despot the media loves to portray – well he is, but not always. These were real, nice, people.

But still Steve Jobs. The car didn’t start. James Bond got his tuxedo back together, apologized to me (!) for not being able to fix it. Said it was the electrical (of course). They said their goodbyes and departed in their giant silent black car. Steve said something like “piece of shit” as he got out, and walked back into the house. Classic Steve – he was right.

Laurene said “come inside and use the phone”. Still rolling with it at this point, I followed her into the house, stepping over the dirty laundry you find in everyone’s real house, and into the kitchen where she pointed me to a phone with god knows how many lines on it. I called AAA, thanked Laurene profusely (for the 50th time) and left quietly. I never acknowledged I had any idea who they were.

A week later, I dropped a six pack of beer off at the Jobs’ door, with a note saying thanks. Like anyone would have done I guess.

I’m an Apple follower. I own a fair amount of Apple stock. You can’t avoid the public persona and reputation of Steve Jobs – the media stories. But, as with the other vignettes some have posted, we don’t hear about or appreciate the personal side of Jobs and his family. They deserve their privacy, and it must be hard to maintain I’m sure, but the flip side of that is that most never see how frankly normal they are. I purchased the bio that came out last Fall but have not started it. I hope that, on balance, it is as much about what a decent, probably brilliant, real, caring individual Steve Jobs is: a husband, father, neighbor – and CEO. Tortured probably, in his brilliance. I saw him in his most personal element – family and friends – around a broken down car in Palo Alto one night, just by chance. I was lucky – and I was delighted.

It’s one of my fondest memories.