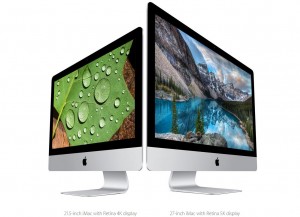 Then there are the frustrating choices Apple has made across the lineup: No Thunderbolt 3 or USB Type-C even though those technologies are apparently ready to go, and no standard Fusion Drive or SSD in any but the top-end 27-inch iMacs. At $100, the jump to a Fusion Drive (albeit a smaller one than in years past) is cheaper than ever, but Apple could really afford to stick that 24GB drive inside every single one of these iMacs to alleviate the unmitigated misery that is using a 5400RPM hard drive in a $1500 desktop computer in this the year of our Lord 2015.

If you’re OK with the list of omissions and you can spring for the storage upgrade, the 4K iMac gets you a great professional-quality screen and a powerful quad-core processor for a pretty reasonable price. The 27-inch iMac is the computer that most blurs the line between consumer all-in-one and high-end workstation, but as long as you aren’t gaming you can get some pretty serious work done on the 21.5-inch iMac. But if Apple can make Fusion Drives and 4K screens standard on all iMacs when the Skylake refresh comes around, we won’t have much left to complain about.

For everyone else, even if you don’t regularly view 4K content, a sharp-looking Retina-level display is one of those things that’s nearly impossible to give up once you get used to it, and the new 4K iMac is competitively priced with the handful of 4K-display Windows PCs we’ve reviewed.

If you have a model from the past few years, this isn’t a must-have upgrade, but it may certainly be worth picking up the new keyboard and mouse or trackpad to give your older iMac a facelift.

The iMac is still the best all-in-one, with an attractive (if predictable) design, near-standard 4K and 5K screens, and even better color accuracy than before. The 21.5-inch version is in some ways the more interesting of the two models, as this is the first time the smaller Mac has been offered with a Retina display. […]

As you can see, then, the iMac mostly hits the right notes, although I wish Apple were more generous with the other specs — besides display quality and resolution, that is. The 21.5-inch version is no longer offered with discrete graphics, not even on the 4K edition, which seems like a mistake. Meanwhile, hybrid Fusion drives only come standard on machines priced from $1,999.

When four pixels are doing the work that only one used to do, the El Capitan interface really shines. Everything’s sharper. Photos look startlingly real, almost like they were printed on paper. And then there’s text, which looks razor sharp like it just rolled out of a laser printer. Even toolbars and Dock icons are more pleasant because all the on-screen graphics have added subtle details that were impossible at lower resolutions. […]

The base storage configuration of the 4K iMac is a 1TB, 5400rpm hard drive. It’s been a few years since I regularly used a Mac with a spinning disk as its primary hard drive, and man, did it feel slow. Starting up was slow. Launching apps was slow. Everything… just… took… longer. It’s disconcerting to take a brand-new, top-of-its-line Mac out of the box and be disappointed by how sluggish it feels, but that’s what I experienced, and it’s pretty much down to that slow hard drive.

The upside of the new Fusion Drive configuration is that it makes the feature — and its faster response times — affordable for anyone. The downside is you don’t see speed improvements of documents and apps offloaded to the SSD as much because the cache is smaller.

It’s not just about resolution though. The new iMac screens can show color better too. […]

But the average person probably won’t notice. I had to look at side-by-side comparisons to really see what has changed. This feature is better for photo and video professionals, not necessarily regular users who just want to do some light editing of photos they took with their iPhone. Just know that you’re getting a really nice screen and that Apple took the extra step to make sure it keeps getting better. Nothing wrong with that.

When you look at these new iMac screens, reds and greens in particular look brighter or more vibrant, like somebody cranked up the saturation dial to 11. With 25% more colors to work with, there’s also more detail because the monitors aren’t eliminating certain hues.

With an old and new iMac side by side, I could spot the difference on some photos, but not all. One problem is that many of our photos—including ones taken with the latest iPhone 6s—are saved in a reduced color palette called sRGB. To take advantage of the new screens, you need images or video saved in a format called DCI-P3. (Not coincidentally, the Mac’s Photos app can now save to that format, but you’ll have to start with high-quality images, like from a DSLR.) […]

Amid this flurry of iMac improvements, two mysteries remain. First, amid the rabbit warren of ports at the back of the iMac, Apple didn’t include a port called USB Type-C—used on the new MacBook laptop (with some controversy) for charging and input alike. Not including USB Type-C on the iMac sends an odd message about Apple’s commitment to that burgeoning standard.

I haven’t had a chance to test how long the batteries last, but Apple reports all three can go for about month on a single charge, and the mouse can give you a nine-hour day’s worth of pointing and clicking with a two-minute charge.