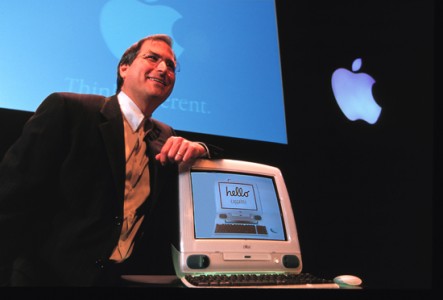 February 24, 1955:
Steven Paul Jobs is born in San Francisco to Joanne Carole Schieble and Abdulfattah Jandali. The then-unmarried couple give up their son to adoption. Paul and Clara Jobs become Jobs’ non-biological parents.

1961:
The Jobs family moves to Mountain View, Calif., part of what would later become known as Silicon Valley.

1968:
Jobs calls Bill Hewlett, the co-founder and co-namesake of Hewlett-Packard, looking for spare parts to build a frequency counter. Hewlett gives Jobs the parts, as well as an internship with the company that summer.

1970:
Meets future Apple co-founder Steve Wozniak through a friend. In Wozniak’s 2006 autobiography, “iWoz,” he notes that the two “hit it off” immediately, despite their four-year age difference.

1972:
Graduates from Homestead High School in Cupertino, Calif., and enrolls at Reed College in Portland, Ore., only to drop out a semester later. Jobs would go on to sit in on classes that interested him, such as calligraphy, despite not getting credit for them.

1974:
Begins a brief stint as an engineer at Atari. Working the night shift, he employs Wozniak to help whittle down the hardware required for a prototype of a single-player version of Pong, the game that would go on to become Breakout. Jobs leaves Atari in the summer to travel through India, only to return to California to live in a commune.

1976:
Co-founds Apple Computer with Wozniak and Ronald Wayne. That same year, the company sells the Apple I in the form of a kit that sells for $666.66.

January 24, 1984:
Two days after the $1.5 million Ridley Scott-directed “1984” Super Bowl commercial airs, introduces the Macintosh to much fanfare during Apple’s shareholder meeting. “For the first time ever, I’d like to let Macintosh speak for itself.” The computer’s voice then says, “Never trust a computer you can’t lift.” Macintosh becomes the first commercially successful small computer with a graphical user interface.

September 12, 1985:
CEO John Sculley engineers Jobs’ ouster from Apple. Jobs resigns as Apple chairman, saying in a board meeting, “I’ve been thinking a lot, and it’s time for me to get on with my life. It’s obvious that I’ve got to do something. I’m 30 years old.” Soon thereafter, Jobs starts NeXT Computer (which later becomes NeXT Software), funded by selling $70 million of his Apple stock. An “interpersonal” NeXT workstation, sporting a built-in Ethernet port, is used by Tim Berners-Lee at CERN to become the first server of the World Wide Web.

1988:
NeXT Computer releases its first computer.

1993: NeXT discontinues hardware business, gets into software instead. The company is renamed NeXT Software, Inc.

November 29, 1995:
Becomes Pixar’s president and CEO. Later in the year, Jobs brings Pixar pubic one week after the release of “Toy Story,” with Tom Hanks doing the voice of Woody and Tim Allen as Buzz Lightyear. The film earns $192 million at the box office. Its success helps make it quite attractive for celebrities to lend their voices to animated characters.

July 9, 1997:
Becomes CEO, initially as the de facto chief, then as interim chief in September.

August 6, 1997: Announces a $150 million investment from Microsoft, coupled with a partnership on Microsoft Office and Internet Explorer for the Mac.

May 6, 1998:
Introduces the iMac, which becomes commercially available in August.

January 5, 2000:
Drops the “interim” from his CEO title at the Macworld Expo, joking that he would be using the title “iCEO,” paying homage to the company’s product-naming conventions. Takes a $1 annual salary. Soon terminates projects including Newton and OpenDoc, and changes licensing terms to make Mac-cloning cost-prohibitive. Technologies developed at NeXT ultimately evolve into Apple products such as the Mac OS.

January 9, 2001:
Introduces iTunes, then exclusively for Mac users. “iTunes is miles ahead of every other jukebox application, and we hope its dramatically simpler user interface will bring even more people into the digital music revolution.”

May 19, 2001:
Opens Apple’s first retail stores in Tysons Corner, Va., and Glendale, Calif. The store designs and personal sales methods proved to be tremendously popular. Apple was running 330 stores worldwide as of July 2011.

October 23, 2001: Introduces the iPod:
“With iPod, Apple has invented a whole new category of digital music player that lets you put your entire music collection in your pocket and listen to it wherever you go…With iPod, listening to music will never be the same again.” Apple’s shipped more than 300 million iPods as of October 2011.

August 1, 2004:
Jobs undergoes surgery to remove a cancerous tumor in his pancreas.

January 11, 2005:
Apple introduces an iPod Shuffle. “iPod Shuffle is smaller and lighter than a pack of gum and costs less than $100…With most flash memory music players, users must use tiny displays and complicated controls to find their music; with iPod Shuffle you just relax, and it serves up new combinations of your music every time you listen.”

Introduces iPod Nano: “iPod Nano is the biggest revolution since the original iPod…iPod Nano is a full-featured iPod in an impossibly small size, and it’s going to change the rules for the entire portable music market.”

October 12, 2005:
Introduces iPod with video: “This is the best music player we’ve ever made…It’s 30 percent thinner and has 50 percent more capacity for the same price, and you get video as a bonus.”

February 2, 2006:
iTunes sells its billionth song: “I hope that every customer, artist and music company executive takes a moment today to reflect on what we’ve achieved together during the past three years.”

January 9, 2007:
Drops “Computer” from Apple’s name. Introduces the iPhone: “iPhone is a revolutionary and magical product that is literally five years ahead of any other mobile phone…We are all born with the ultimate pointing device–our fingers–and iPhone uses them to create the most revolutionary user interface since the mouse.” Apple owns 19.1 percent of the smartphone market as of August 2011, having shipped 108 million iPhones worldwide as of March 2011.

September 5, 2007:
Introduces the iPod Touch: “The iPod Touch is a landmark iPod, ushering in a whole new generation of features based on its revolutionary multitouch interface and built-in Wi-Fi wireless networking…People are going to be amazed at how thin it is and how much it does.”

December 5, 2007:
Inducted in the California Hall of Fame by Gov. Arnold Schwartzenegger.

June 9, 2008:
Unveils MobileMe, Apple’s first cloud offering: “Now users who are not part of an enterprise that runs Exchange can get the same push email, push calendars and push contacts that the big guys get.”

January 27, 2010:
Introduces the iPad. Apple sells 500,000 iPads during their first week on the market and gains 84 percent of the tablet market by the end of the year, with an estimated 12.9 million shipped as of December 10, 2010, and 25 million shipped worldwide as of June 2011. That same month, the company discloses that it has sold 200 million iOS devices.

November 16, 2010:
Convinces Apple Corps. and EMI Group to make Beatles albums available on iTunes: “We love the Beatles, and are honored and thrilled to welcome them to iTunes…It has been a long and winding road to get here. Thanks to the Beatles and EMI, we are now realizing a dream we’ve had since we launched iTunes 10 years ago.”

January 17, 2011:
Goes on medical leave of absence from CEO post nearly two years after the six-month break he took to undergo a liver transplant.

March 2, 2011:
Jobs makes a surprise appearance to take the wraps off the iPad 2 at an invite-only event in downtown San Francisco. It’s his first public appearance at a company event since announcing his third medical leave from the company in January.

August 9, 2011:
Apple shares edge past those of Exxon Mobil to become the most valuable U.S. company, in terms of market capitalization, at $337.17 billion.